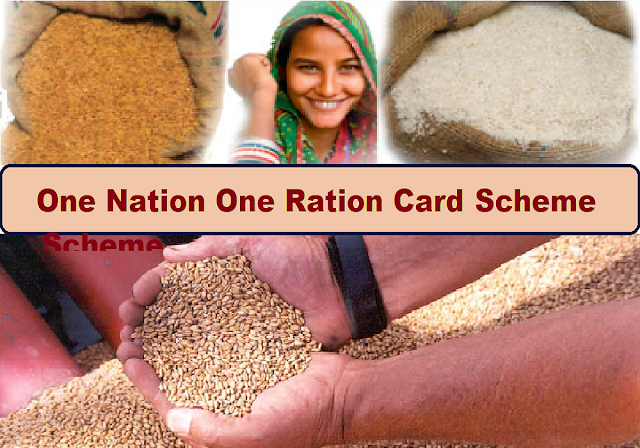 To implement the 1 Nation 1 Ration Card Scheme across the country by 1 June 2020, the Central Government has introduced Inter Portability of Ration Cards in 4 states. This inter-state portability is first implemented between Telangana-Andhra Pradesh and Maharashtra-Gujarat. Now people of these states can buy ration cards from Public Distribution System (PDS) shops in both states.
The 1 Nation 1 Ration Card scheme is now operational in every 2 states pair. In these 4 states, both the inter-state and inter state portability of the ration card is being successfully implemented.
Also there will be no problem due to stock management. This is because the Food Corporation of India (FCI) warehouses have adequate capacity and can store 3 months ration in advance. In 7 other states, the government is examining the inter portability of ration cards i.e. beneficiaries can avail ration quota from any PDS shop located within the state

Trial is going on in these 7 states

What is One Nation One Ration Card scheme?

National portability of ration cards will ensure all beneficiaries, especially migrants, to gain access to the Public Distribution System (PDS) across the country. Therefore, the Narendra Modi government is working towards the One Nation One Ration Card Scheme. PDS is building a central repository to help nationwide duplication of ration cards. People will get food grains quota from PDS shop located near them in any district across the country.
Ration card holders will not be tied to any PDS shop and thus their dependence on shop owners will be reduced. The biggest beneficiaries will be migrant laborers who move to other states to seek better employment opportunities and ensure their food security.
Digitization of ration card i.e. connecting the ration card to the Aadhar card is a necessary process. There is a need to ensure availability of PoS machines at all PDS shops to implement the 1 Nation 1 Ration Card Scheme. The central government has targeted to complete the formalities of the scheme within 1 year. Approximately 78% of Fair Price Shops (FPS) have been automated by installing electronic PoS devices so far.