BSNL : Chairman Anupam Shrivastava announced that all facilities of the AAdhar will be available in more than 3000 centers of BSNL. 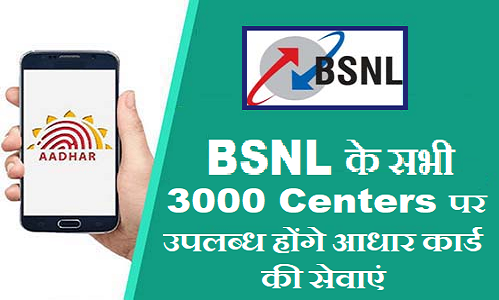 Bharat Sanchar Nigam Ltd (BSNL), which is governed by the Indian government, is soon going to provide facilities like Aadhar card centers, such as creating a new Aadhar card and updating the Aadhar card in more than 3000 centers. Now you will also be able to avail the facilities of the Aadhar by visiting your nearest BSNL Customer Service Center. .

BSNL has signed an MoU with UIDAI, BSNL chairman Anupam Shrivastava told that BSNL is now also authorized by the Unique Identification Authority of India (UIDAI), like the post office and the bank, and now Aadhaar services will be available at 3000 BSNL centers
Aadhaar Card Update : How to
change my AADHAAR date of birth
2018
In the statement given by Shrivastav, he also told that the process of opening the Aadhaar Center has already been started, the first AADHAR center can be started from January 1. On this, UIDAI CEO Dr Ajay Bhushan Pandey said that more and more centers can be provided more services to more people “, which will make it easier for people to deal with problems related to the AADHAr Card.

Anupam Srivastava also told that it would take about 3 months to do so, it would be estimated that the estimated expenditure would be more than Rs. 90 crores. Because all types of biometric devices and many types of machines will also be required, and BSNL will also provide full help from UIDAI. BSNL Chairman / Managing Director Anupam Shrivastav said in the statement of the Press of India PTI. Which is good news for almost all Indians, will provide relief to the problems related to the aadhar Card
20.59368478.96288