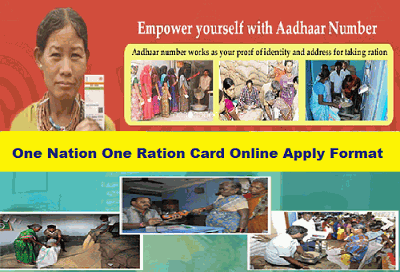 The Union Government has announced the introduction of One Nation One Ration Card for all citizens of India from June 1, 2020. The One Nation One Ration Card is an online standard system implemented by the central government to be followed while issuing new ration cards. Under this, the central government is going to start Aadhaar-ration card linking. The primary objective of this scheme of the government is to ensure food security and provide the freedom to the beneficiaries to buy ration from any PDS shop

In some states, the One Nation One Ration Card is already functional under the name of Integrated Management of PDS (IMPDS). The Government of India is planning to create a real-time online database of ration cards on the lines of GSTIN.

Aadhaar card – linked to ration card, will ensure that no person is deprived of receiving subsidized food grains under the food security scheme when he moves from one place to another. Accordingly, linking ration card with Aadhaar card will reduce corruption and beneficiaries will be able to get ration easily from any PDS shop across the country.

One Nation One Ration Card online

Under the One Nation One Ration Card initiative, eligible beneficiaries will be able to avail their eligible food grains under the National Food Security Act (NFSA) from any fair price shop in the country using the same ration card. National portability of ration cards will ensure all beneficiaries, especially migrants, to gain access to the Public Distribution System (PDS) across the country. Therefore, the Union Government is working towards One Nation One Ration Card Scheme.

The IMPDS system is already implemented in Andhra Pradesh, Gujarat, Haryana, Jharkhand, Karnataka, Kerala, Maharashtra, Rajasthan, Telangana and Tripura. Here people get ration on subsidy from any district of the state.

Digitization of ration card i.e. connecting the ration card to the Aadhar card is a necessary process. To implement the 1 Nation 1 Ration Card Scheme, availability of PoS (Point of Sale) machines at all PDS shops should be ensured. The central government has targeted to complete the formalities of the scheme within 1 year. Approximately 78% of Fair Price Shops (FPS) have been automated by installing electronic PoS devices so far.