Skip to content
Under the aegis of the Ministry of Culture of the Government of India, the Indira Gandhi National Center for the Arts (IGNCA) has created a mobile and web music application ‘SANGAM’, as it is known by the name of the application, it has been imagined that many of devotion and divinity In the form of confluence of streams, there is a confluence of various art forms which are part of our religious traditions. The application has been seen as one-stop virtual destination for people of classical, folk, devotional and popular genres of music.

Initiative SANGAM is the first initiative of the Ministry of Culture, Government of India. 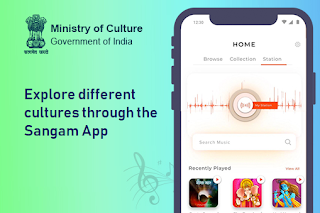 Sangam App will soon be updated with many Sufi, Gurbani and other devotional tracks of all religions.

The Sangam app is now available on Android and iOS platforms, and also as a web app.